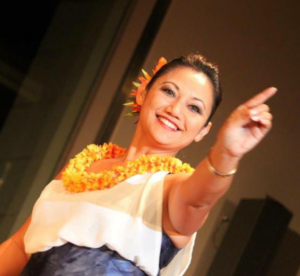 Kau`i (pronounced KAU-E) Dalire is no stranger to performing on stage and being under the spotlight, Dalire’s DNA has given her a head start in the world of Hawaiian entertainment. Born into a well-regarded hula dancing family from the Windward side of O’ahu, Hawai’i, Dalire’s Mother, Aloha Dalire, was the winner of the very first Miss Hula competition in the Merrie Monarch festival, often referred to as the “Super Bowl” of hula. In time, Dalire, as well her two sisters would follow in their Mother’s footsteps and capture the title as well, making Hawai’i history. Now, Dalire is Kumu Hula to her own schools known as Halau Ka Lihilihilehua ‘O Hopoe Kuikanani, with locations in Hawai’i, Japan (Ikebukuro, Kanagawa, Saitama and Okinawa), Mexico, Australia, Michigan, North Carolina, Las Vegas, Oklahoma, Virginia, and California.

Although Dalire excelled in hula dancing, it wasn’t the only area where she honed her skills. An accomplished athlete, Dalire was proficient on the basketball court and winning awards while a student at Kamehameha Schools. In her college years, she even won a position on the Linfield team in Oregon. Little did she know that all of the training, discipline, and hard work in hula and sports would eventually be the foundation of a future career.

Kau`i Dalire also does artist management and development and has produced and contributed to Hawaiian artists such as Mailani, Kupu Dalire-Na’auao, Sean Na’auao, Three Plus, Josh Tatofi, Hu’ewa, and more.  She has performed with legendary artists, Jerry Santos, Brothers Cazimero, Makaha Sons and Na Leo Pilimehana. Kau’i is  at the very top of her trade sharing a piece of Hawai’i with the world.

Kau’i’s mission: to assist established acts and develop the next generation of up-and-coming artists in the music and entertainment industry. As well as continue to perpetuate Hawaiian music and culture around the world.